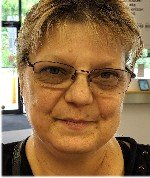 MALLOY – Mary L. (Tobin), 53, of Vintondale, passed away April 23, 2021 at West Penn Hospital, Pittsburgh.  Born May 3, 1967 in Johnstown, daughter of Carl and Frances (Galer) Tobin.  Preceded in death by parents.  Survived by husband Harry J. Malloy, Jr, to whom she was married 34 years and children:  Nicole and Greg, both of Vintondale.  Also survived by brother Martin Tobin, Vintondale, and sister Amy Leitz, Ebensburg.  Mary had been employed by Diamond Pharmacy in Indiana, where she served as a prison tech.  She, along with her husband and family enjoyed camping, bowling, and visiting the occasional casino.  She was a member of the Fraternal Order of Eagles, in Indiana.  Friends will be received from 2-4 and 6-8 p.m., Tuesday at the Askew-Houser Funeral Homes, Inc., Nanty Glo, where a Funeral Service will be held at 11:00 a.m., Wednesday, the Rev. Robert Westrick, officiating.  Interment at United Brethren Cemetery, Belsano.    In lieu of flowers, donations in Mary’s memory may be made to any organization that assists in the care and rescue of animals.