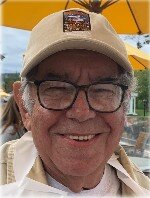 DeJOHN – John Anthony, 73 of Ebensburg, passed away unexpectedly on December 1, 2021 at UPMC Altoona Hospital.  Born April 4, 1948 in Canonsburg, Pa., son of the late Marino and Catherine DeJohn.  Survived by his wife, Brenda, to whom he was married 44 years, and children:  Katie (Michael) Gardner, of Connecticut; and Dr. Luke (Kara) DeJohn, of Wyomissing, Pa.; grandchildren: Amadeus, Ella, Ryan, Natalie and Haley, and brother James (Melissa) DeJohn of Washington, Pa.  John was a graduate of California University of Pennsylvania and Indiana University of Pennsylvania where he attained his Masters degree.  He had taught for the Intermediate Unit 8 in the Cambria Heights School District for 33 years.  A member of the Ebensburg Moose, and a Coast Guard veteran of the Vietnam War.  John enjoyed woodworking, loved the Pirates and had a passion of collecting toy trains.  Friends will be received from 2:00 to 6:00 p.m. Sunday at the Askew-Houser Funeral Homes, Inc., Ebensburg, where a vigil prayer service will be held.  Funeral Mass will be held at 11:00 a.m. Monday at Holy Family Roman Catholic Church, Colver, the Rev. Christopher Lemme, TOR, celebrant.  Interment at Holy Family Cemetery.  In lieu of flowers, donations in John’s memory may be made to the Altoona Railroaders Museum, 1200 Ninth Avenue, Altoona, Pa. 16602  (https://railroadcity.square.site/shop/donations/16)   Condolences may be left for the family at www.askew-houser.com