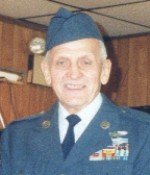 Obituary of George A. Nestor

NESTOR – Master SGT., George A., Retired, 88, of Nanty Glo, passed away Nov. 25, 2019. Born April 25, 1931 in Ebensburg. Preceded in death by brothers, Joseph and James; and sister, Mary McAndrews. Survived by wife of 51 years, the former Irene Deskevich; and sons, Adam (Kalliopi); Andre; and Roman. Also survived by numerous nieces and nephews. George was a former tree surgeon and because of that, when he went into basic training, they placed him as a Medic. While in basic training, George came up with a better way to tourniquet limbs for life-saving measures in wartime. He was in three wars. While in the US Army, he was in the Korean War; and served two volunteer tours in Vietnam, while a flight engineer in the US Air Force. He retired in 1976 as Master Sergeant, having been awarded The Distinguished Flying Cross, The Air Force Commendation Medal and two Air Medals. He originated the phrase, “If it ain’t broke, don’t fix it!” George also wrote numerous letters about the Great Famine in Ukraine and about historical and military subjects to the Tribune Democrat and Pittsburgh papers; and even won a writer’s award from The Ukrainian Technological Society. George was a very generous man. He loved his wife and family and always provided all they needed. His wife, Irene always called him, “My Heart of Gold.” He will be sadly missed by his family and friends and all who knew him. Friends will be received from 2-4 and 6-8 p.m. on Friday at the Askew-Houser Funeral Homes, Inc., Nanty Glo, where Parastas will be sung that evening. Brief Service at 9:30 a.m. at the funeral home on Saturday, followed by Divine Liturgy at 10 a.m. at Holy Ascension Ukrainian Orthodox Church, the Very Rev. George Hnatko, officiating. Interment to follow at Holy Ascension Ukrainian Orthodox Cemetery. Military Rite by Nanty Glo, Twin Rocks and Vintondale Area Ritual Team. In lieu of flowers, donations in George’s memory may be made to Holy Ascension Ukrainian Orthodox Church.

Share Your Memory of
George
Upload Your Memory View All Memories
Be the first to upload a memory!
Share A Memory
Send Flowers