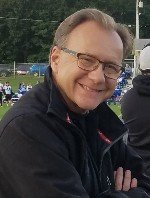 TATARKO – Michael, Sr., M.D., 60, of Twin Rocks, passed away Jan. 16, 2020. Born July 7, 1959.  Doc Mike is survived by Lori, his wife of 37 years; children and grandchildren:  Mike & Lauren and their children, Jack, George and Jane;  Ben & Alyssa, and their children, Joss, Nate, Lydia and Hailey; Annie Tatarko; and Luke Tatarko.  Also survived by his mother, Irene Tatarko; siblings, MaryAnn & Rick Adomnik; Therese & Bill Stawarz; Tim & Nadine; and Marina & Chris Zindash;  Mother in law, Mary Ann Smith; and numerous nieces, nephews and extended family members.  Preceded in death by father, George; brother, Thaddy; brother in law, Bruce Losiewicz; and fathers in law, Bob Donaldson and Bill Smith.   Doc Mike enjoyed life to the fullest.  His love for his family was immeasurable.  His wife, kids and grandkids were everything to him and he took great pride in them all, and enjoyed pulling out his phone to show many the pictures of his loves. His deep, unwavering faith kept him grounded and humble. He truly enjoyed playing his guitars for Saturday evening Mass and being the choir director.  Most doctors played golf, but almost any given Wednesday you could find him on the creek fishing with his Uncle Joe Kachick.  He enjoyed going to the Yellow Creek Trout Club to fish and to share Joe's hand tied flies.  Mike relished the outdoors, whether he was hunting or gardening with his Dad and Tim, teaching the kids the ins and out of the woods, or just walking/hiking and telling his stories of  “when I was little” or “I remember when”.    UltraMike enjoyed running, he ran Sunday mornings on the Ghost Town trail for over 20 years with his many running buddies.  He has numerous marathons under his belt; two of his favorites, running the Marines Corp and the JFK-50 with uncles Joe, Marty and Bob Szekeresh.  He had finished the Laurel Highlands 75 mile trail run at least 15 times and when he could no longer run, he found comfort in helping the other runners the morning of the race;  he had also ran a number of 100 mile races.  Doc Mike knew from a very young age he wanted to be a doctor and come back to serve those in this valley. In his 30 year career he wore many hats, none being more important than caring for his patients.  He loved his long-time partners, Drs. JeanMarie Koh, Michaeleen Wilson and Dan Johnson along with head nurse, Kathy Donaldson as they all worked like a well oiled machine.  Mike worked hard for our communities, whether he was spearheading projects, behind the scenes pulling strings or using his contacts, he took great pride in our valley. One of his favorite projects was the cleaning of the Blacklick Creek. Whether in general conversation or while recruiting physicians to the area, he would explain how the orange sulphur colored water became clean.  He would explain the process, and would finish by saying, "There are fish in the Blacklick - How cool is that!"  To his friends, you were all very important to him. He loved running into you just to chat, finding out how your families were, talking about hunting, telling deer stories, politics and the weather. To his mom, siblings and extended family (the in-laws and out-laws), he loved you all.   Our holidays were made extra special because of you. A special 'Thank You!' to Pat and John Kupchella and Alena Gourley, we will never be able to express how grateful we are to you for being there for him!   Friends will be received from 2-8 p.m. on Monday and Tuesday at the Askew-Houser Funeral Homes, Inc., Nanty Glo, where vigil prayer service will be held. Funeral Mass will be held at 10 a.m., Wednesday at St. Mary’s Roman Catholic Church, Nanty Glo, the Rev. Leonard Voytek, celebrant. Committal to follow at St. Charles Cemetery, Twin Rocks.  In lieu of flowers, the family asks that donations be made to St. Charles Cemetery Chapel Fund (his latest project), P.O. Box 223, Twin Rocks, PA 15960.

Share Your Memory of
Michael
Upload Your Memory View All Memories
Be the first to upload a memory!
Share A Memory
Send Flowers