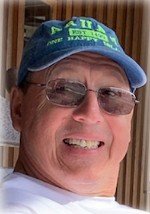 MARCINKO – Charles Stephen,  Jr., 64, of Ebensburg, passed away February 23, 2021 at Memorial Medical Center after a brief battle with Covid-19.  Born March 7, 1956 in Johnstown, son of the late Charles S. and Rosemarie (Kepko) Marcinko.  Survived by wife, the former Michele Brady, to whom he was married 33 years, and children:  Charles III, State College;  Sarah Marcinko, wife of Tyler Brazle, Martinsburg;  Luke Marcinko, State College; and grandson Jeffery Charles Brazle, who idolized his pop-pop.  Brother of Joseph (Lina) Marcinko, California and Marycathryne Cairns, Johnstown.  Also survived by in-laws, Bill & Theresa Brady and family. Chuck was a graduate of the University of Pittsburgh, where he attained a BS and MSW in social work.  His career spanned 35 years, serving as a social worker at the Ebensburg Center and Torrence State Hospital.  He had also served as a union representative for the local PSSU.  A member of Holy Name Roman Catholic Church, where he served as a Eucharistic Minister and a member of the Men’s Choir.  He also served for the past three years as a member of the Central Cambria School District School Board and on the Ebensburg Recreation Board.  He enjoyed his time off fishing, family trips to his beloved Myrtle Beach, and was an avid Steelers, Pens, and Pirates fan.   He especially enjoyed going on adventures with his wife and grandson. Friends may gather from 12:30 p.m. Saturday at Holy Name Church Narthex, followed by a Funeral Mass at 1:30 p.m., the Rev. Brian Warchola, celebrant.  Entombment at Holy Name Mausoleum. In lieu of flowers, donations in Chuck’s memory may be made to the Ebensburg Area Ambulance Association or to Dauntless Fire Company.  Arrangements are in the care of the Askew-Houser Funeral Homes, Inc., Ebensburg (www.askew-houser.com)

To send flowers to the family or plant a tree in memory of Charles Marcinko, Jr., please visit Tribute Store
Saturday
27
February

Share Your Memory of
Charles
Upload Your Memory View All Memories
Be the first to upload a memory!
Share A Memory
Send Flowers
Plant a Tree