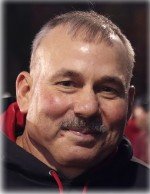 Please share a memory of Francis to include in a keepsake book for family and friends.
View Tribute Book

MINOR - Francis Gene “Frank”, 58, Portage, went to be with the Lord on April 20, 2021. Born September 14, 1962, in Windber, son of William and Barbara (Zganjer) Minor. Preceded in death by parents. Survived by his loving wife Karen (Howell), to whom he was married for 28 years, and children Victoria, Indiana, PA;  Maria, fiancée of Dominic Andrews, Sheboygan, WI., and Evan, Hurlburt Field Air Force Base, FL. Brother of Susan (David) Wolfe, Punxsutawney; David (Sherry), Portage; William (Barbara), Portage; James, Portage; Stefanie Kosaber, Penn Run; and John, La Plata, MD. Favorite uncle to numerous nieces, nephews, and great nieces and nephews. Fun cousin fondly remembered as “Frankie.” Friend to all, too many to name.  Frank was a 1981 graduate of Forest Hills and proudly served in the U.S. Army Reserves. He enjoyed attending services at the South Ebensburg United Church of Christ, Portage, belonged to the “2 Cs and a Bee” Beekeepers’ Association, and adored his time with the 4-H Dairy Club and Cambria County Fair. A logger by trade, he had been self-employed since 1987 at Frank Minor Logging and co-founded Cambria Hardwoods Inc.  Frank will be long remembered as a passionate outdoorsman who enjoyed hunting, fishing, and trapping, as well as farming and beekeeping. Companions on trips out west and buddies who joined him at his camp in Indiana and on Lake Erie fishing trips will forever cherish memories made with Frank in his element. Proud of the life he created with Karen, his work ethic cultivated the beautiful property that he called his “castle.” Frank was so many things to so many people--an inventor, an expert arrowhead finder, an excellent cook, canner, and barbecuer, a big kid who loved Disney, and an avid Steeler and Penn State fan. A jack-of-all-trades, he learned the family tradition of roasting pigs, which he showcased at reunions and parties, and he became a winemaker, specializing in honey wine that he generously shared. Perhaps most impressively, Frank was a truly happy person who would do anything for anyone, always willing to lend a helping hand. Frank will be greatly missed as a family man and loyal friend with a big heart.

To send flowers to the family or plant a tree in memory of Francis Minor, please visit Tribute Store
Friday
23
April

Share Your Memory of
Francis
Upload Your Memory View All Memories
Be the first to upload a memory!
Share A Memory
Send Flowers
Plant a Tree