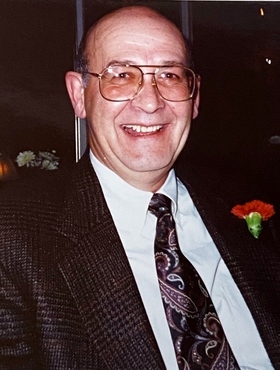 CHAMPE – David Madison, 87, of Morgantown, WV and Ebensburg, PA, died February 4, 2020 at Ruby Memorial Hospital in Morgantown.  He was born in Spencer, WV on June 10, 1932 son of the late Lundy and Mary Pauline (Ferrell) Champe and grew up on his family farm with two younger siblings, Janet and Franklin. He graduated from Nicholas County High School, Summersville, WV in 1950 where he was a member of National Honor Society and President of Thespians. He was a 1955 graduate of WVU with a BS in Agriculture and 30 hours of graduate work toward a Master's degree in 1956. While at WVU, he was a member of student government, President of Sphinx, Senior Men's Honorary and Mountain Men's Honorary. He was employed as a manager at The Mountainlair student union while at WVU. His first job was as a Vocational Agriculture Teacher in Boone County, WV from 1956-57. David had a long and extremely successful career in the insurance industry. He was employed with The Travelers Insurance Company in Charleston, WV from 1957 -1958 as a field supervisor. From 1958-1966 he was the agency manager for Travelers in Pittsburgh. In 1966 he relocated to Chicago, IL and was regional sales manager with The Zurich Insurance Company. In 1971-1972 he was employed by CNA Insurance Companies as agency manager. David relocated to Pittsburgh, PA in 1972 with The Security Group as a branch manager until 1977. He relocated again to Ebensburg, PA in 1977 as sales manager with the Bituminous Insurance Agency. In 1980, David started his own business: Evergreen Insurance Associates Inc, Independent Insurance Agency in Ebensburg, PA where he remained Founder and Chairman until his retirement in 2001. He ran his company based on the same principles that he possessed: integrity, honesty, service to others, efficiency and attention to detail, generosity, common sense and the ever-present optimism and sense of humor. He was beloved and respected by his colleagues, employees and clients in the industry, many of whom became lifelong friends. He received multiple honors and awards over the course of his career and was most proud of The Distinguished Service Award presented by the Insurance Club of Pittsburgh, Inc.   He was active in his community in Ebensburg as a member of Rotary, board member of Lloyd Cemetery, contributor to Boy Scouts of America and Jaffa Shrine annual drive for Crippled Children's Hospital.  David was a man of faith and was a long-time member of The Ebensburg United Methodist Church. He loved a good game of golf, an ornery joke, scratch off lottery tickets and a quality scotch. He was an avid fan of WVU sports and a long-time season ticket holder to Mountaineer football games, which he attended with his family. He delighted in driving his RV to the green lot for tailgating on game days.  He loved his family dearly and will be greatly missed by those left behind. He is survived by his wife of 25 years, Barbara (Amick) Champe; son David Wells Champe (Debby); grandson David James Champe (Lauren); Stepson Jeff Amick (Kim) and grandchildren Ryan (Melissa) Amick, Jason (Stephanie) Amick, Camdynne (Kyle) Moore; daughter in law Wanda Amick and grandchildren Taylor (Brianna) Amick and Matt Amick; grandson Ben Lauffer (Maggie);  his great- grandchildren:  Kaylen, Asher, Chase, Easton, Avie, Kennon, Corra Lee, Owen, and Jonathan.   Also survived by his sister,  Janet Champe Fitzwater and family; sister in law,  Jean Foster and family; sister in law,  Wilma Champe and family and many nieces and nephews.   He was preceded in death by his first wife, Joan (Wells) Champe; his brother Franklin Champe; Stepson Mark Amick and brother in law Dennis Foster.   Friends will be received from 2-4 p.m.  and 6-8 p.m, Friday, February 14th at the Askew-Houser Funeral Homes, Inc., Ebensburg.  A Funeral Service will be held at 10:00 a.m., Saturday at the Ebensburg United Methodist Church, Pastor J. R. Virgin, officiating.  Interment to follow at Lloyd Cemetery, Ebensburg, PA.   In lieu of flowers, donations in David’s memory may be made to the WVU Foundation Davis College of Agriculture, Natural Resources and Design or Pride Travel Fund (https://give.wvu.edu/) or to the Shriners  Hospitals  www.shrinershospitalsforchildren.org

Share Your Memory of
David
Upload Your Memory View All Memories
Be the first to upload a memory!
Share A Memory
Send Flowers