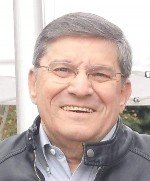 WARHOLIC - George R., Sr., formerly of Rockville, Maryland, passed away peacefully on Saturday February 22, 2020 surrounded by loving family at home in Frederick, Maryland.  He was diagnosed with Pleural Mesothelioma in April 2018 and fought a valiant battle enduring major surgery, chemotherapy, and radiation.   George was born on February 8, 1947 in Twin Rocks, PA.  He was preceded in death by his parents, John & Mary (Matachosky) Warholic and his brother John Warholic Jr.   He is survived by his loving wife of 50 years, Patricia (Wolfe); children George (Claudine), Michael, and Jennifer (James) Wilson; grandchildren Kevin, Lacie, Jamie, Kayla, James Jr, Ethan, Chloe, Jonathan; his brother, David (Joyce) Warholic & Nephew, Scott (Stacey) Warholic.  George grew up the son of a coal miner in Twin Rocks, PA.  He would meet his future wife, Pat, in 6th grade at Big Bend Elementary. They began dating as seniors at Blacklick Township High School, where George was a graduate with highest honors (1965).  As a teenager, George would achieve rank of Eagle Scout in the Boy Scouts of America.   He attended Penn State University where he earned a bachelor’s degree in Mineral Economics (1969).  George and Pat would be married shortly after his graduation from Penn State, on August 16, 1969.  While at Penn State, George was a member of Army ROTC, and upon graduation he was commissioned as a Second Lieutenant U.S Army in the Armor Branch.  Stationed in Fort Riley, Kansas, George was a Tank Company Executive Officer/Platoon Leader.  His unit took part in Exercise Campaign Reforger II (10/70) and Reforger III (10/71) in West Germany where they were tasked with readiness exercises during the Cold War.  George and Pat would welcome sons George Jr. and Michael while stationed in Fort Riley.  George was honorably discharged in 1973.  Fresh out of the Army, George was hired by Foster Associates in 1973 as an Economist, and moved his young family to Rockville, MD where, in 1980, daughter Jennifer would be born.  At Foster Associates George contributed to “The Foster Associates Report,” a weekly industry-renowned report on Oil and Natural Gas Regulatory news.  He used his G.I. Bill benefit to earn an MBA, majoring in Applied Economics at George Washington University (1977).  He became the office “computer guy,” taking up computer coursework at Control Data Institute to further his education.  Upon being laid off in 2005, George found employment with the Department of Energy (DOE) where he provided yearly coal reserve estimates for the United States, until his retirement in 2011.  His efforts at DOE were featured in an article in The Wall Street Journal.   George was an active member of the Knights of Columbus at St. Katharine Drexel Catholic Church, receiving his Fourth Degree Exemplification on 11/4/2018.  He was also active in the Polish Legion of American Veterans (PLAV) for many years, at Our Lady, Queen of Poland and St. Maximilian Kolbe.  The PLAV offered him the occasion to meet foreign dignitaries, and United States President, George H.W. Bush.  George spent countless hours researching his family genealogy, from the coal towns in Pennsylvania where he was born, to the small towns in Poland that his grandparents left behind.  His extensive research consisted of scouring through phonebooks at the public library, trips to the Library of Congress, recording interviews with residents, and visiting/cataloging local cemeteries before information was readily available on the Internet.  In addition to researching his own genealogy, he produced a book on Pat’s family titled “The Genealogy of the Nipps Family of Blacklick Township.”  His love for his hometown led him to design the postal cancellation stamp and cachet for the Twin Rocks/Expedit Postal Centennial in 1996, and he was the Master of Ceremonies for the Blacklick Township Sesquicentennial celebration in 2000. When he wasn’t researching his family, he was spending time with them.  He was the Webelos Den Leader when George Jr was in the scouts, and he loved watching granddaughter Kayla perform in Color Guard.  He also ran in three 5Ks with Kayla and his son Michael when he was 66 and 67 years old.  George carried on family traditions brought to the United States by his grandparents, taking great pride in preparing Holy Supper on Christmas Eve and baking Paska for Easter.  Local services will be held at St. Katharine Drexel Catholic Church in Frederick, Maryland: Visitation on Thursday 2/27/2020 from 6:00pm - 8:00pm, followed by a wake service from 8:00pm - 8:15pm; Visitation Friday 10:00am, followed by a funeral mass at 11:00am & luncheon at the church. Additional services will be held in Nanty Glo, at Askew-Houser Funeral Homes, Inc., Nanty-Glo, on Saturday February 29, 2020 beginning with visitation from 11:00am - 1:00pm, followed by a funeral ceremony at 1 p.m, Deacon Thomas Buige, officiating.  At George’s request, after the service all are welcome to join the family for a meal in his honor at Hoss’s in Ebensburg, PA at 3:00pm.

In lieu of flowers, the family requests donations be made in his memory to St. Katherine Drexel Building Fund: stkatharinedrexel@saintdrexel.org.

Share Your Memory of
George
Upload Your Memory View All Memories
Be the first to upload a memory!
Share A Memory
Plant a Tree