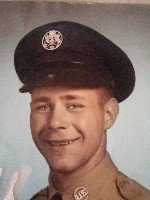 McCULLOUGH – Thomas D., 86, Born in Strongstown area of Indiana County on Christmas Day 1933. God took him home on June 26, 2020 from the Hollidaysburg Veterans Home, where he resided with his fellow veteran brothers and sisters of the US military. Tom was a 26 year veteran of the Air Force. Preceded in death by first wife, Beatrice Hamm, of Virginia, after 44 years of marriage; father, Lawrence McCullough, mother, Ivy (Sowers); and step father, Jesse McCullough; maternal and paternal grandparents, George & Edna Sowers and John & Margaret McCullough. grandson, Scott Craddock, brother in law, Edward Kotelnicki; beloved cousin-brother, Scott Klash; and many dearly loved family and friends. Survived by wife, Gloria of 9 years; son, Bill (Charlene) Craddock; daughter, Debbie Howard; sister, Jessie Kotelicki ( and husband, Clay Wilson), Vinco;  grandson, Marc (Jill); granddaughters, Renee Cleary; Heather (Brandon) Stevens. Grandchildren, Halley Cleary, Emily Craddock, Finn Stevens; Collin, Adam, Joel, Steven, Jacob Craddock; numerous nieces and nephews, great nieces and nephews; and one great great nephew. Stepchildren, Brian (Carrie) Eckenrod; Mary (Scott); and their children, Nevada Deaten; Reagen, Ben and Emerson Eckenrod. Tom joined the Air Force at age 18 and never looked back. His love for flying in those planes doing various duties gave him so many great memories and some not so great. He served during the Korean and Vietnam Wars. He also was part of the first plane to plane air refueling. His picture with his commander at the nose of the refueling tanker was a proud moment of that accomplishment. After many years of airplane flying, he became land bound and in charge of many men in his new capacity. He said it wasn’t the same as the days when he entered and retirement started looking good to him. He then started a new career with the Richmond VA Post Office and retired after 15 years. As this shows, Tom was a dedicated man to his careers, his family especially, and to the person he served with all his heart, his Lord and Savior, Jesus Christ. He never lost his love for his country and the Air Force. He was a true red, white and blue human being. When Tom went to his heavenly home, he didn’t need an airplane…he “flew” home on angel wings. He was loved and always will be; and will be greatly missed. Memorial Service will be held at Lakeside Community Nazarene Church, Ebensburg on Saturday, July 11 at 11:00 a.m. (masks urged) Remembrance gifts are recommended to be made to the Gary Sinise Foundation (Rating is 4 out of 4) for Veterans. Arrangements are in care of the Askew-Houser Funeral Homes, Inc., Nanty Glo.

To send flowers to the family or plant a tree in memory of Thomas McCullough, please visit Tribute Store
Saturday
11
July

Share Your Memory of
Thomas
Upload Your Memory View All Memories
Be the first to upload a memory!
Share A Memory
Send Flowers