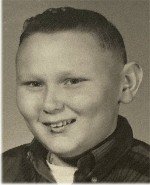 JOHNSON – Randy O, 68, of Ebensburg passed away September 3, 2020 at home.  Born June 24, 1952 in Johnstown, son of the late Ross A. and Claire H. (Noble) Johnson.  Survived by sister, Rosemary A. Johnson, and twin sister Ruthie (Jeff) Maurey, all of Ebensburg.  Also survived by nieces and nephews:  Christopher Maurey, Ebensburg, Jenna Elizabeth Maurey, Pittsburgh, Emma Claire Maurey, Colver, and Korbin David Maurey of Johnstown.  Randy was a graduate of Central Cambria Schools, and attained an accounting degree from St. Francis University.  He was formerly employed by the Ebensburg Borough where he served as a licensed Water Plant Operator for many years.  Randy was an avid gun enthusiast holding memberships in the Carrolltown, Jackson Twp, and Cresson Gun Associations.  He also enjoyed music and movies, particularly the music of Elvis Presley and any Clint Eastwood movie.  Private funeral services will be held at the convenience of the family, with burial at Lloyd Cemetery.  In lieu of flowers donations are suggested to Randy’s gun club associations or gun safety programs for young people.  Arrangements are in the care of the Askew-Houser Funeral Homes, Inc., Ebensburg.

Share Your Memory of
Randy
Upload Your Memory View All Memories
Be the first to upload a memory!
Share A Memory
Send Flowers