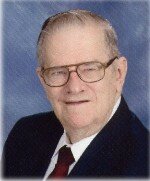 Please share a memory of William to include in a keepsake book for family and friends.
View Tribute Book

BUMFORD -  William C., “Bill”,  89, of Ebensburg, passed away September 6. 2021 at Indiana Regional Medical Center.  Born August 17, 1932 in Ebensburg, son of the late Walter and Esther (Roberts) Bumford.  Preceded in death by brother Clyde Eldon “Newt” Bumford and niece, Bonnie (Alexander) Grenella.  Survived by sisters: Eileen Alexander, Smryna, Georgia and Genevieve Singel, of Ebensburg,  as well as nieces and nephews:  William Alexander, Barbara Alexander, Beth Smith, Edward Singel, David Singel, Douglas Singel and Beverly (Tim) Molnar.  Bill was a 1950 graduate of Ebensburg-Cambria High School and was a graduate of the Cambria-Rowe Business College. He served as Ebensburg Borough’s very first borough manager, a post he held for 31 years.  Throughout his borough career, he was key to the development of the present water & sewer plant and upgrades, development of the Ebensburg Airport, the early years of the successful Mainstreet program, as well as his practical advice and counsel to the Borough Council well into his retirement.  He was a lifelong member of the Ebensburg United Church of Christ (Congregational) where he sang in the church choir, served as elder, deacon, church council and trustee board.  Many will remember Bill for his active involvement and as a founding member of the former Legionaires Drum & Bugle Corp., the Cambria Cadets Jr. Drum & Bugle Corps and the former Thete Ro Girls Drill Team (affiliated with the I.O.O. F. (Oddfellows) where he served as a drill instructor.  A Korean War veteran, he was a past commander of the Ebensburg Post 363 American Legion and a member of Ebensburg Post 4962 VFW.  Among his many hats, he also served on the Lloyd Cemetery Association Board of Directors, managed Little League Baseball, and assisted with the formation of the Holy Name Football League. In his retirement, Bill was a regular Coffee Club attendee, and was known throughout the area for his kindness and respect to the servers and staff at area restaurants.  A gathering of friends will be held from 10:00 a.m. until the time of funeral service at 11:00 a.m., Wednesday, September 15, 2021 at the Ebensburg United Church of Christ, Andrew Jones, officiating.  Interment at Lloyd Cemetery.  Military Rite by Ebensburg veteran’s organizations.  Covid precautions are suggested. In lieu of flowers, donations in Bill’s memory may be made to the Ebensburg United Church of Christ, 217 East High Street, Ebensburg, Pa. 15931.  Arrangements are in the care of the Askew-Houser Funeral Homes, Inc., Ebensburg.

To send flowers to the family or plant a tree in memory of William Bumford, please visit Tribute Store
Wednesday
15
September