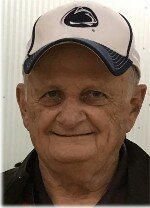 Please share a memory of Michael to include in a keepsake book for family and friends.
View Tribute Book

OSTINOWSKY – Michael Jr., 80, of Ebensburg, passed away September 15, 2021 at UPMC Altoona.  Born April 23, 1941 in Johnstown, son of the late Michael and Mary (Kuhar) Ostinowsky.  Survived by wife of 56 years, the former Donna (Zamboni) Ostinowsky and children:  James M. (Mary Ann) Ostinowsky, Ebensburg; Patrick J. (Brenda) Ostinowsky, Rincon, Georgia; Michele (Greg) Wickman, Mentor, Ohio; Andrew T. (Georgette) Ostinowsky; Ebensburg; nine grandchildren and one great-grandchild.  Brother of Thomas, Ebensburg; James (Janet) of Nanty Glo; John “Jack” (Annette) of Twin Rocks, Eugene and Dennis Ostinowsky, both of Nanty Glo; Mary Kay (Greg) Soyka, Salem, Ohio and numerous nieces and nephews.  Mike was a retired sales manager for the former Wolf’s Furniture Store, having worked at the Nanty Glo, Cumberland and St. Mary’s stores.  He was an Air Force veteran.   A member of Holy Name Roman Catholic Church, Ebensburg, he enjoyed being a Eucharistic minister, altar server, CCD instructor, and volunteer for the school and parish. Mike was an avid golfer and fisherman and enjoyed time spent with his family.  At his request there will be no viewing.  Private Funeral Mass at the convenience of the family at Holy Name Church, Rev. Brian Warchola, celebrant.  Interment at St. Charles Cemetery, Twin Rocks.  In lieu of flowers, donations in Mike’s memory may be made to the Holy Name School Angel Fund.  Arrangements are in the care of the Askew-Houser Funeral Homes, Inc., Ebensburg

To send flowers to the family or plant a tree in memory of Michael Ostinowsky, Jr., please visit Tribute Store

Look inside to read what others have shared
Family and friends are coming together online to create a special keepsake. Every memory left on the online obituary will be automatically included in this book.
View Tribute Book
Services for Michael Ostinowsky, Jr.
There are no events scheduled. You can still show your support by sending flowers directly to the family, or planting a memorial tree in memory of Michael Ostinowsky, Jr..
Visit the Tribute Store

Share Your Memory of
Michael
Upload Your Memory View All Memories
Be the first to upload a memory!
Share A Memory
Send Flowers
Plant a Tree