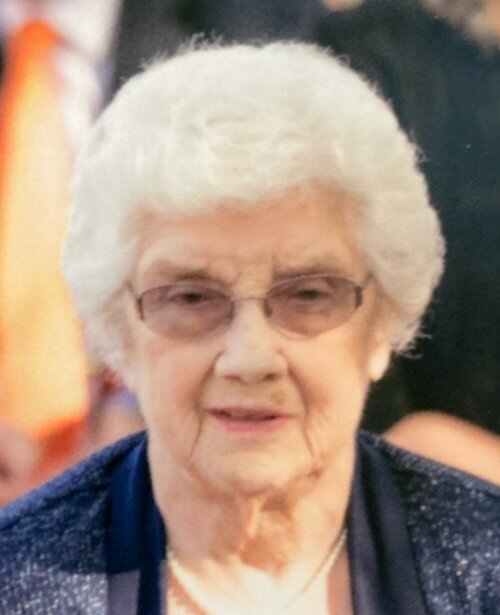 Please share a memory of Dolores to include in a keepsake book for family and friends.
View Tribute Book

BRACKEN - Dolores Ann “Dot” (Dishong), 92, passed into her eternal rest on February 26, 2022, at the Hollidaysburg Veterans’ Home. She was ushered into glory by her Lord Jesus and greeted by the friends and family members who preceded her. Dot is no doubt strolling heaven’s golden streets, visiting as many folks as possible and wishing she had a newly baked cake in hand.

Dot was born in Johnstown on Wednesday, January 8, 1930, the first child of Royden and Florence Dishong. She graduated from Ebensburg-Cambria High School in 1947. Two years later, in a ceremony officiated by the late Rev. Clair Gartland of Pike Grace Brethren Church, Dot married Elwood Bracken, the love of her life and her husband for 72-plus years. They established their first home before Elwood, drafted into the U.S Marine Corps in December 1951, deployed to fight in the Korean War. Dot and Elwood raised two children, Roger and Roxanne.

Dot was among the longest-tenured members of Pike Grace Brethren, faithful in her worship and in her behind-the-scenes service. For years, she baked cookies and worked in the kitchen for Vacation Bible School. She enjoyed making gift bags for children at church. Dot’s large red Bible was a repository not only of God’s word but also of her record of her family’s milestones — written in her neat, but tiny, script. Her day was not complete without a time of prayer and Bible reading.

A small pillow on the back of her sofa attests to one of Dot’s abiding passions: “A life without horses … l don’t think so!” For decades, Dot was a fixture at horse shows at the Clyde Saddle & Trail Club and the Cambria County Fair. Her interest in horses was not limited to watching events and cheering on participants; Dot was more than willing to help out with barn work, cleaning stalls and washing buckets. Ironically, no one can recall ever seeing Dot sitting on or riding a horse.

Dot also loved dogs, especially Boston Terriers and Boxers. She is remembered for the sticks of chewing gum that she tucked inside birthday cards. Dot loved to visit family and friends, often arriving with a “poor man’s” cake in hand. Her ability to whip up a meal on a moment’s notice left nieces and nephews awestruck. She was known for her sweet tea and her sloppy joes, notable for their finely ground beef.

Most of all, however, Dot loved her family. She relished her roles as a faithful wife; a devoted mother, grandmother, and great-grandmother; a doting sister; and a concerned aunt and great-aunt.

A Memorial Service for Dot will be held at Pike Grace Brethren Church, Mundy’s Corner, on Saturday, March 5. From 10-11 a.m., family members and friends can gather to offer condolences and share memories of Dot with one another. A funeral service, officiated by Pastor Rudy Sheptock, will be held from 11a.m. to noon, and will be followed by a fellowship meal at the church’s Family Center.

Askew-Houser Funeral Homes, Inc., Nanty Glo, is assisting the family during its time of loss. Memories of Dot may be shared at the home’s website, www.askew-houser.com.

Please consider making a donation in Dot’s memory to the PKD Foundation (pkdcure.org) or the Hollidaysburg Veterans’ Home (dmva.pa.gov).

To send flowers to the family or plant a tree in memory of Dolores Bracken, please visit Tribute Store
Saturday
5
March

Share Your Memory of
Dolores
Upload Your Memory View All Memories
Be the first to upload a memory!
Share A Memory
Send Flowers
Plant a Tree