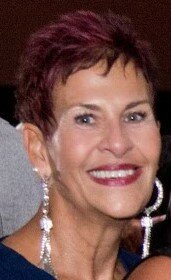 Please share a memory of Diana L. to include in a keepsake book for family and friends.
View Tribute Book

HOOVER - Diana L. "Lynn" (Rickens), 66, Ebensburg, passed away on Wednesday April 20, 2022 in Washington Twp.  Born October 1, 1955 in Altoona, daughter of the late Clayton and Doris (Campagna) Rickens.  Preceded in death by infant son, David Hoover, Jr.   Survived by husband Dave Hoover, to whom she was married 44 years and daughters: Kearstin (Sterling) LaRue and Natale (Dustin) Link, all of Ebensburg;  grandchildren:  Treston "Zoe", Sterling III, Griffin, Trent, and Kayvia Renée; Wyatt, Maison, and Analyse and great granddaughter Juna.  Sister of Denise (Randy) O'Donnell, Cresson;  Yvonne (John) Gentry, Hollidaysburg; Kim (Jeff) Auker, Altoona, Chris (Karen) Rickens, Altoona and numerous nieces and nephews.  Lynn was a member of Holy Name Roman Catholic Church, where she had served as a CCD teacher and assisted with the communion classes each spring.  She was retired from the Cambria County Domestic Relations Office where she served as Clerk III.  Lynn enjoyed music of the 60' and 70's and dancing.  She loved spending time with her family, especially her grandbabies.  A graduate of Penn Cambria High School and the Wilma Boyd Career School.  Friends will be received from 10:00 a.m. until time of Funeral Mass at 11:00 a.m. Monday, April 25th at Holy Name Catholic Church & Narthex, the Rev. Brian Warchola, celebrant.  Interment at the church cemetery at a later date. Arrangements are in the care of the Askew-Houser Funeral Homes, Inc., Ebensburg.  Condolences to the family may be left to www.askew-houser.com.    In lieu of flowers, donations in Lynn's memory may be made to Multiple Sclerosis Society (Keystone Chapter) www.nationalmssociety.org

To send flowers to the family or plant a tree in memory of Diana L. Hoover, please visit Tribute Store
Monday
25
April

Share Your Memory of
Diana L.
Upload Your Memory View All Memories
Be the first to upload a memory!
Share A Memory
Send Flowers
Plant a Tree