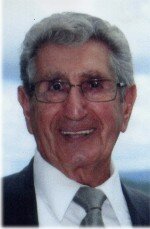 Please share a memory of Michael to include in a keepsake book for family and friends.
View Tribute Book

TSIKALAS – Michael G., 95, of Ebensburg, passed away May 18, 2022 at Richland Woods, Johnstown.  Born June 3, 1926 in Uniontown, son of the late Gust D and Anna (Niahous-Hixenbaugh) Tsikalas.  Best known as “Mayor Mike” or “Coach”,   Mike proudly served in the US Navy during WWII.  He was assigned to an amphibius land cruiser which was one of the first ships to touch down on Omaha Beach .  His Navy adventure later took him across the Pacific Ocean to China and Tokyo.  After the war, for many years he worked at the former Hi-Way Diner in Ebensburg alongside his brother Spero. He served as Ebensburg Mayor and Cambria County Prothonotary for 20 years each.  As Prothonotary, he took great joy in administering the Oath to new American citizens.  As mayor, he was part of the Lake Rowena Revitalization project, along with it's popular fishing program and was a vital part of the early roots of the Ebensburg Mainstreet program.  He was an affable leader and will be long remembered for his easy going way of dealing with people.  Mike had a passion for football.  He was a PIAA official and coached at the grade school level at both Holy Name and Ebensburg Elementary Schools.

Mike was a lifelong member St. Mary’s Greek Orthodox Church, Johnstown and served on the church board.  Mike was also a lifelong member of Post 363 American Legion, Post 4963 VFW, LOOM (Moose), and Dauntless Fire Company, all of Ebensburg.  He also was an avid golfer and bowler.  Friends will be received from 2:00 to 6:00 p.m., Sunday at the Askew-Houser Funeral Homes, Inc., Ebensburg, where a memorial service will be held at 4:00 p.m.      Funeral Service will be held at 11:00 a.m. Monday, at St. Mary’s Greek Orthodox Church, the Rev. Fr. Michael Rustick, celebrant.  Entombment at Holy Name Mausoleum.  Military graveside ritual by the Ebensburg veteran’s organizations.  In lieu of flowers, donations may be made in Michael’s memory to St. Mary’s Greek Orthodox Church,435 Somerset Street, Johnstown, Pa.  15901.  Condolences to the family may be made to www.askew-houser.com

To send flowers to the family or plant a tree in memory of Michael Tsikalas, please visit Tribute Store
Sunday
22
May

Share Your Memory of
Michael
Upload Your Memory View All Memories
Be the first to upload a memory!
Share A Memory
Send Flowers
Plant a Tree