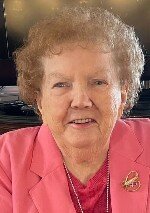 A Gathering Will Be Held From

Please share a memory of Irene to include in a keepsake book for family and friends.
View Tribute Book

MAKIN - Irene "Doll" (Toth), 91, of Colver, passed away peacefully October 30, 2022. Born April 7, 1931 in Strongstown, daughter of the late Joseph and Esther Toth. Preceded in death by husband, Carl, to whom she was married 67 years; sons, David and Bruce; brothers, Albert, Joseph and Steve Toth; sisters, Helen Raimondi, Margaret Wszolek, Ethel Buck, Julia DeBiase and Betty Shutter; son-in-law, Kevin Bodenschatz; and brothers-in-law, Russell and John Makin. Survived by son, Richard Makin, Curwensville; daughter, Cathy Valiton; and son-in-law, Robert Valiton, Ferndale; daughters-in-law, Gail Makin, Athens, GA.; and Janet Makin, Ebensburg; 10 grandchildren and 13 great-grandchildren. Also survived by sisters, Ida (Robert) Kovacic, Nanty Glo and Mary Rudolph, Levittown, NY.; brothers-in-law: Walter (Marge) Makin, Bradford, and James (Bonnie) Makin, Nicktown; as well as numerous nieces and nephews. Irene was a very active member of the Colver Presbyterian Church for 62 years.  She was a member of the choir, taught Vacation Bible School, held various positions within the church and was always a vibrant participant in the yearly Calendar Party. She was a homemaker while holding several house cleaning positions through the years in her hometown of Colver.  She was also an exceptional waitress at the former Colver Pick and Shovel Restaurant and worked at the Cambria County Fair for many years.  She then became employed at the former Jamesway Department Store, and held the position of Stockroom Supervisor. A gathering will be held from 11 a.m. until time of funeral service at noon on Tuesday at the Askew-Houser Funeral Homes, Inc., Ebensburg. Interment, Pineland Cemetery, Strongstown. In lieu of flowers, donations in Irene’s memory may be made to St. Jude Children’s Hospital. Condolences may be left for the family at www.askew-houser.com

Share Your Memory of
Irene
Upload Your Memory View All Memories
Be the first to upload a memory!
Share A Memory