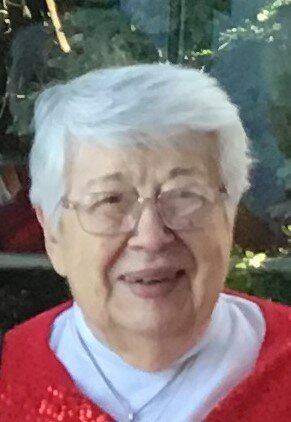 Please share a memory of Eleanore to include in a keepsake book for family and friends.
View Tribute Book

KENNELL – Eleanore  R., 97, of Colver and a native of Akron, Ohio, passed away peacefully November 3, 2022 at home in Colver, surrounded by her loving family.  Born September 25, 1925 in Akron, daughter of the late Hugh Allen and Ida Josephine (Gardner) Weyrick.  Last surviving member of her immediate family, she was proceeded in death by her first husband Clint K. Rowles, Jr., second husband Christian Raber Kennell, daughter Sue Eileen Rowles, sons: Kevin Weyrick Rowles, and Thomas Allen Rowles; twin sisters Jean Szalay and Joan Morris, and son-in-law Anthony Wayne Baker.  Survived by children:  Clint K. (Mary Jo) Rowles, III, of White Bear Lake, MN.;  Patricia (George “Ray”) Fenchak, Colver; and Sally Irene Rowles, of Lizella, Georgia.  Also 18 grandchildren, numerous great-grandchildren and several great-great grandchildren.  Eleanore was a member of the Westmont Presbyterian Church, had been an active volunteer for the University of Pittsburgh Theatre Department. Past president of the board for the YWCA, active in the Westmont Arts Council and a member of the Eastern Star.  She had been an active volunteer for the Cambria County (American Legion) Fair, and often served as a judge for needlework submissions.   In addition to raising her family, she had always worked and volunteered in her community.  She retired from the Penn Traffic Company, working for them until their closure in 2010.  In Eleanore’s free time, she enjoyed doing needlework, reading, playing Canasta, and will be long remembered for her Holiday brunches.  She lived her life to her favorite Sinatra song, “My Way”.  At her request there will be no viewing.  A private family celebration of her life will be held at the family’s convenience.  In lieu of flowers, donations in Eleanore’s memory may be made to the American Legion County Fair, 883 North Julian Street, Ebensburg, Pa.  15931.  Arrangements are in the care of the Askew-Houser Funeral Homes, Inc., Ebensburg.  Condolences for the family may be left at www.askew-houser.com

To send flowers to the family or plant a tree in memory of Eleanore Kennell, please visit Tribute Store

Look inside to read what others have shared
Family and friends are coming together online to create a special keepsake. Every memory left on the online obituary will be automatically included in this book.
View Tribute Book
Services for Eleanore Kennell
There are no events scheduled. You can still show your support by sending flowers directly to the family, or planting a memorial tree in memory of Eleanore Kennell.
Visit the Tribute Store

Share Your Memory of
Eleanore
Upload Your Memory View All Memories
Be the first to upload a memory!
Share A Memory
Send Flowers
Plant a Tree